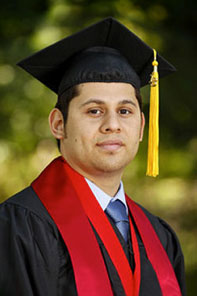 At Fresno State's 102nd University Commencement on May 18, 2013, chemistry major and Fresno native Arturo Gasga was awarded the university's highest honor for an undergraduate, the President's Medal, for his outstanding record of research and service.

Coming to the United States from a poor neighborhood in Mexico at the age of 15, Arturo has worked a scribe in the emergency room at St. Agnes Medical Center and as a chemistry tutor for the Health Careers Opportunity Program. From 2011-2013, he worked with Dr. Melissa Golden on the organic synthesis of BMAA, a compound that may be involved with ALS (“Lou Gehrig’s disease”) and Alzheimer’s disease. For this work, Gasga won an award from the American Chemical Society at the SACNAS symposium, and he presented his work at the 2013 national American Chemical Society meeting.

Gasga has served as a volunteer screener for clinical research trials at UCSF-Fresno/Community Regional Medical Center and tutored high school students in chemistry. His goal is to become a physician and return to the Central Valley to care for underserved people in the Latino community as a bilingual primary care doctor.