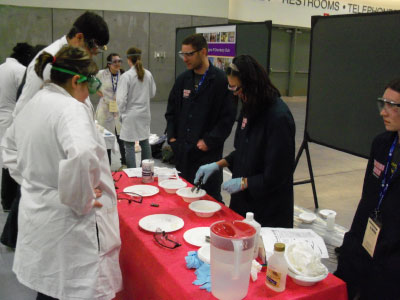 The Fresno State Student Affiliate Chapter of the American Chemical Society, more commonly referred to as the CHEM Club, has grown into a model for student organizations on campus. CHEM Club members have worked to increase scientific literacy not only among Fresno State students but also the people of California's Central Valley through a number of outreach activities rooted in science, technology, engineering and mathematics (STEM).  While working to share the passion they have for their chosen field of study, they have been able to acquire grant money to strengthen their efforts and have been recognized on a national level for their achievement and dedication.

Nearly three years ago, the Fresno State Chemistry department and the department’s student organization, the CHEM Club, began working in partnership with the Discovery Center, a local non-profit science and nature educational center located in Fresno, CA.  The CHEM Club began by volunteering to work the center’s Saturday Science program which allows children in the local community to be exposed to the sciences in a casual and inviting environment. As interest increased, the club began to develop its own STEM outreach activities and grew to host two Saturday Science days each month. As the club’s STEM outreach efforts grew, a kid friendly mascot now known as Nick L. Mole was purchased.  The mascot, an often recognized symbol of the Fresno State CHEM Club, helps to soften the image of the sciences from the public’s perspective and begins to develop a whimsical relationship with children during our outreach events.

The club’s hard work did not go unnoticed and inspired others.  In the summer of 2011, faculty and staff from the Chemistry department attended the Engaged Department Institute for the Sciences workshop held at the CSU Chancellor’s office in Long Beach, CA where, using the CHEM Club’s Saturday Science work as a foundation, they were able to apply and receive a grant to fund the department’s STEM/service learning involvement interests in the community. Matching funds were also provided by the Richter Center for Community Engagement and Service-Learning, increasing the opportunities that the club can provide to children in the Central Valley.

Beginning in the Fall of 2012, the CHEM Club began to take their show on the road! Rather than limiting themselves to one venue, the club began to reach out to local elementary and middle schools. They began to evolve their outreach program to reach into communities with higher percentages of students from underrepresented minorities in the sciences. “This is a unique facet of a student science club that serves more than just their peers and campus but goes beyond through meaningful service learning activities” said Dr. Joy Goto, Associate Professor of Chemistry and Co-Advisor of the Fresno State Chemistry Club.

To open up more opportunities for Chemistry students at Fresno State, the CHEM Club has developed a program called the Chemistry Career Seminar Series (C2S2).  Supported by an Instructionally Related Activities grant from ASI, the C2S2 has brought successful career chemists and professionals in related fields to Fresno State to share their experiences with students.  Through faculty recommendations and student requests, the CHEM Club has contacted scientists from industry, the government and private enterprise to give students at Fresno State a fresh and inviting perspective of their career opportunities.  Since its inception in the Spring 2012 semester, this program has brought several professional chemists from across the nation to speak to Fresno State students about what lies before them after graduation. Speakers have included skin care chemists, forensics scientists and a Hollywood special effects artist/pyrotechnican. In the Spring of 2013, the club applied for another year of funding for this grant through ASI.

All of these efforts do have their rewards!  The CHEM Club recently traveled to New Orleans, LA to the American Chemical Society’s Spring National Meeting. The American Chemical Society (ACS) is recognized as the world’s largest scientific organization.  While attending the meeting, they shared some of their ideas that have made them a successful club with other universities.  They also were able to participate in an outreach event, something they are very familiar with, organized by the national ACS at the Audubon Zoo in New Orleans. A number of students presented the research they have participated in while attending Fresno State.  At the conclusion of the undergraduate portion of the week’s program, the CHEM Club accepted the American Chemical Society’s Outstanding Chapter Award, the highest award given to student organizations, and the Green Chemistry award. This was the club’s third Outstanding Chapter award in a row.

“The students worked really hard to put together many amazing events all year to win this distinction.  Most people don’t understand how much work it takes until they see the 50-page report we wrote to list and describe all of the work the CHEM club does to support its members and to increase science literacy in the public through outreach.”

As they begin to look towards the 2013-2014 academic year, the Fresno State CHEM Club looks to maintain the success it has had with the traveling outreach activities. They continue to seek venues to reach school children in the Central Valley and work to increase their interest in Chemistry and the sciences.  The club plans to find sites to conduct one outreach activity each month.  Activities are selected with the grade level of the audience in mind and seek to highlight the associated teaching standards. They have also applied for funding through ASI Inc. to create another activity based on molecular modeling. The club wants to develop a molecular modeling workshop which could be taken to schools and give Valley school children even more hands-on learning.

There are several opportunities for growth in the Chemistry department’s STEM outreach efforts.  Working with graduate student teaching assistants and other part-time faculty in the Chemistry department, Dr. Melissa Golden has been developing a creative STEM outreach assembly line of sorts.  Students enrolled in CHEM 1A are encouraged to volunteer to work any of the STEM outreach events conducted by the CHEM Club during a given semester. This gives them an opportunity to learn more about the activities and how they are utilized. When those same students continue to CHEM 1B, they have an assignment where they will create a service learning project. Since the teaching laboratory environment allows for more one-on-one interaction with students, the project is assigned through the laboratory period where students, working in groups of three or more, will work as a team to create  their own STEM/service learning activity. 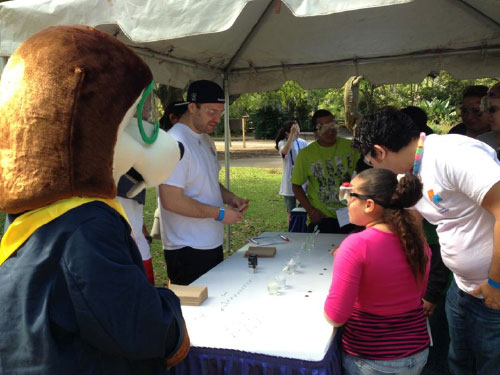 Fresno State CHEM Club Chemistry Ambassador Extraordinaire, Nick L. Mole looks on as CHEM majors Ryan Dougherty and Arturo Gasga share an activity entitled Lincoln Drops with children at the ACS’s outreach event at the Audubon Zoo in New Orleans, LA. A number of Fresno State undergraduate and graduate students were in New Orleans to attend the ACS national meeting during the Spring of 2013. 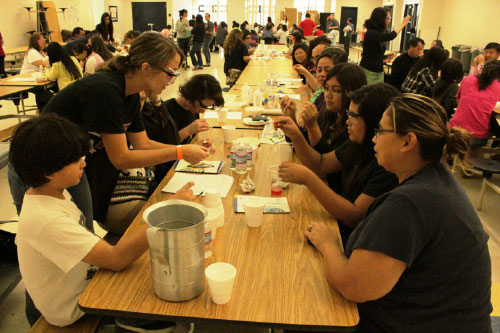 Fresno State CHEM Club members attended the UCSF Jr. Doctor’s Academy for National Chemistry Week in October of 2012.  The CHEM Club took two activities that day: Extracting DNA from a Strawberry and Iron in Cereal. In this photo, CHEM Club volunteers walk students through an experiment where the student will isolate and separate the DNA from a strawberry. 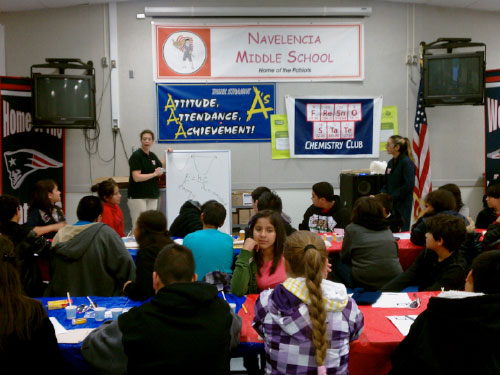 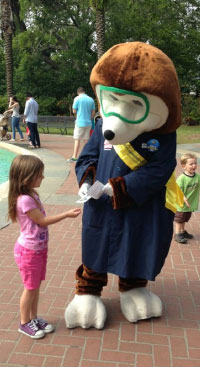