Geologists from Around the World Convene in Fresno for Annual Meeting

by John Wakabayashi (Chair, Dept. of Earth and Environmental Sciences) 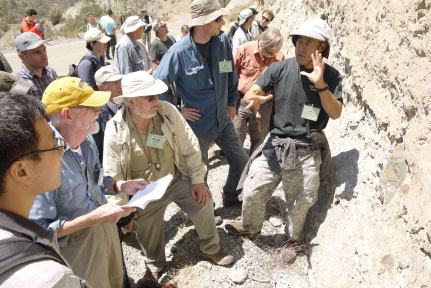 Meeting Chair John Wakabayashi talks about the geology along Panoche Road during stop 1 of his 2013 Cordilleran Section field trip (May 23-24) to the California Coast Ranges. Most of the international participants in the meeting went on this field trip.  (Photo by David Shimabukuro)

Fresno State's Department of Earth and Environmental Sciences (EES) hosted the 2013 Annual Meeting of the Cordilleran Section of the Geological Society of America on May 20-22 at the Radisson Hotel and Conference Center in downtown Fresno with associated field trips before (May 18-19) and after (May 23-24) the meeting.

There were over 280 talks and posters presented on a range of topics from processes including active plate margin processes (several sessions with the largest international participation), igneous processes and volcanology, vertebrate paleontology, critical zone processes (Earth surface processes featuring interaction between atmosphere, biosphere, and geology), water and water supply, and engineering geology (including geohazards).

EES faculty formed the organizing committee for the meeting and participated very actively in it, along with many of their students. EES Department Chair John Wakabayashi served as the general meeting chair and technical program chair, personally inviting most of the international scientists who attended. He convened four technical sessions, led the largest field trip of the meeting, gave two talks, and was co-author on five additional presentations given by current or former students.